I don't know why I keep thinking about this but I do hope that in the next iteration of Batman on film, they fix his cowl. What do I mean? Well... I don't really like that open eyeholes version where the actor has to wear black makeup. I would prefer something like they did in The Dark Knight with the sonic eyes version of the cowl: 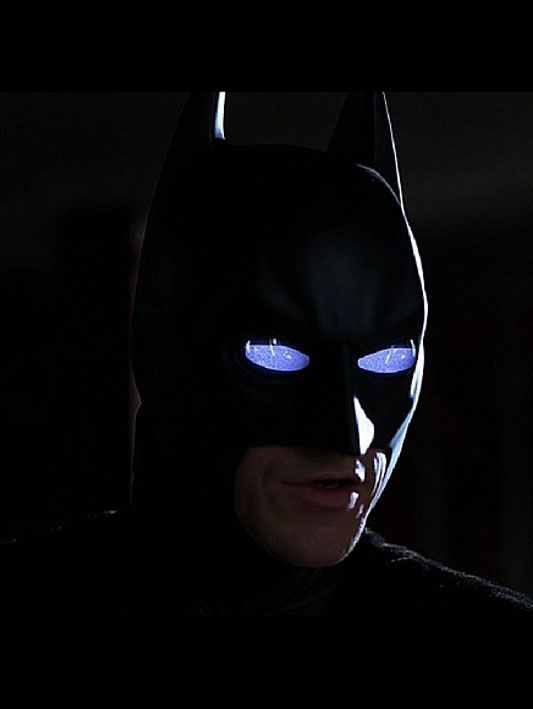 To me, that's a more realistic version of the BatCowl as the covered eyepieces do quite a few things:

1. Conceal's Bruce's identity: The eyes are actually one of best ways to figure out who someone is. It's the same reason why Spiderman uses reflective eyepieces over his mask.

2. Protects Batman's eyes: If I were a villain, I would use a 3 Stooges eyepoke to take Batman out.

3. Can provide technological functionality: Much like the sonar eyes, you can use the eyepieces as a Heads Up Display (HUD) like Iron Man. Or you can enable night vision or infrared vision.

I understand that for film, people want to see the actor's face to get a better portrayal of their emotions, that's why Spidey gets his mask ripped off (like in every movie) and Iron Man always shows an internal view of Stark's face in the armor but they could do a similar thing for Bats. Heck, I would even go as far as making the cowl more of a helmet so that Bats can even seal it to prevent being exposed to gas etc etc (and even the suit more like armor but that's another time).

And this would actually also allow for the cowl to be worn by several people to throw off suspicion or in the case where Bruce is incapacitated (in the old TV show, did Alfred wear the suit one time?).